This festival is by no means the first Latvian song festival to be organised outside Latvia. In fact ELKS2015 can be seen as the continuation of a history of Latvian song festivals in Western Europe (and globally) that began in the most difficult of circumstances: in the fear and desperation that were features of refugee life in newly-divided Europe after 1945.

As the Second World War ended, with half of Europe under Soviet rule, over 120,000 Latvians (some 6% of the pre-war population) found themselves stateless refugees. They were scattered across Western Europe in hundreds of “Displaced Persons” camps run by the United Nations Relief and Rehabilitation Administration (UNRRA).

It is a testament to the strength of Latvia’s choral culture that the refugees sought comfort in song in what were the darkest days of the nation’s history. Hardly a year had passed since the end of the war when, in the summer of 1946, the Latvian choirs that had been formed in each of the camps came together as a massed choir in the Fischbach Displaced Persons camp near Nuremberg, performing to an audience of 5000. In the period between 1946 and 1948 no less than 13 song festivals took place in Germany and Austria.

As Displaced Persons and also in later years, when the refugees had made new lives for themselves in the West, song festivals provided a  focus for exiled Latvians to come together as a nation not only for cultural reasons  but also for political reasons:  to press their demand for a free and independent homeland. As the camps closed, the refugees formed exiled Latvian communities in Europe, Australia, and North and South America. They continued to organise song festivals wherever they settled, such as in 1951 in London when the UK Latvian festival attracted an audience of over 5000 to the Royal Albert Hall and formed part of that year’s “Festival of Britain” programme.

After the success of this and other similar events, the next challenge was to organise a Europe-wide festival. The main initiator of this idea was the UK-based Latvian composer and conductor Alberts Jerums. Under the auspices of the European Latvian Association (it was then called the Latvia Renewal Committee), the first “European Latvian Song Festival” took place in Hamburg in 1964.

Hamburg was followed by European festivals in Hanover in 1968, Cologne in 1973 (which marked the centenary of both the first Latvian song festival in Riga and the Latvian national anthem), London in 1977 and Leeds in 1982. The political aspect of these events was highlighted by the organisation of a global song festival in 1979 in Gotland (an island off Sweden barely 130 kilometres from the Latvian coast) and then also in Muenster, West Germany, in 1984 and 1987.

The last song festival organised in Europe, outside of Latvia, was in Helsingborg, Sweden, in 1989. This was during the tumultuous period which preceded the renewal of Latvian independence and, for the first time, the festival featured choirs and performers from Latvia itself.

Once Latvia had regained its independence in 1991, it was thought that there would no longer be a need for European Latvian Song Festivals outside of Latvia. However, the opportunity now afforded by Latvia’s first ever presidency of the EU means that the European Latvian Association has, once again, taken up the baton, after a 26-year break, to organise ELKS2015 in Brussels, in the very heart of Europe.

Your can download this file in Microsoft Word format here. 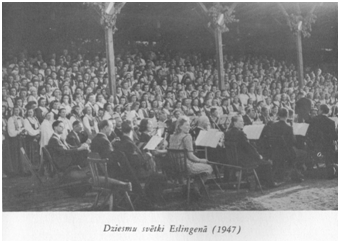 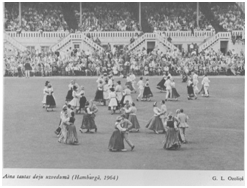 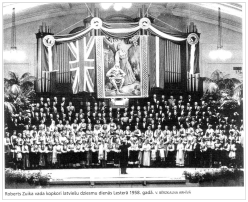 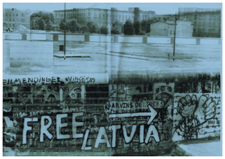 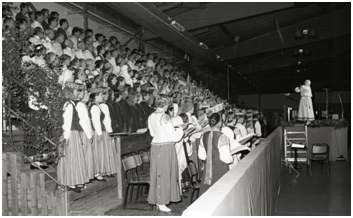 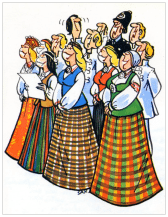