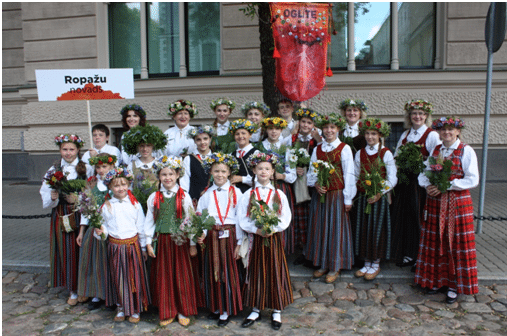 “A strong young generation cannot grow without the impression of traditions. Every father and every mother should know the moral lessons that emerged from the nation throughout centuries and see to it that they shine light on the youth of their children. Folk songs are where the indestructible spirit of a nation lies.”
Anna Brigadere

We come from Latvia – a land inhabited by a proud and singing nation that honors its traditions. We befriended Latvian folk songs, dances and games in 1989, and have carried on with this friendship for 25 years now. The children are acquainted with the traditions of their ancestors in pre-school, from the age of three. Main cast of the folklore group “Oglīte” is composed of children aged 7 to 15. We not only sing and dance, but also learn traditional musical instruments – harp, flute, violin, as well as celebrate Solstice festivals. Each year, we take part in singing competitions and various folk festivals. Since the year of establishment of the folklore group, we have participated in children’s folklore festival “Pulkā eimu, pulkā teku”. We have received a number of folk awards, the Grand Prize of folklore among them.

We perform at home – in Ropažu region, Riga and its suburbs, as well as elsewhere in Latvia. We have also demonstrated our talent in many foreign countries – festivals in Poland, the Czech Republic, Slovakia, Germany, Sweden, Denmark, Ireland, Russia, Lithuania, etc. This year we celebrated the 25th anniversary of the folklore group. At the moment we are actively preparing for various spring contests, competitions and Student Song and Dance Festival. We will be happy to introduce ourselves and Latvian folk songs to the audience elsewhere in Latvian and the world!